Most people will be amazed to hear that using milk on the compost and in the garden is a good way to feed the soil. This claim was not widely accepted by all not until a closer inspection was done and it began to make sense to people. The presence of enzymes, proteins amino acid and natural sugars in milk makes it a food and it’s beneficial to both humans and animals.

These same nutrients in milk can also be used to nurture a healthy community of fungi and microbes in your manure and the soil of your garden. Raw milk is best for this purpose because it has not heated as this may alter those nutrients that will serve as perfect foods for the soil and plants generally; but any milk will still give that nutritional facts and benefits. The use of milk is one of those old methods used to nurture soils and plants, but this has been lost to modern mechanized industrial agriculture.

Through research, Milk has been proven to be a fungicide and soft-bodied insecticide because it is difficult for insects to digest milk sugars due to their lack of pancreas. It was discovered by a Brazilian researcher; Dr. Wagner Bettiol that milk was useful to treat powdery mildew on zucchini. Subsequently, Wagner Bettiol’s discovery was put to test by New Zealand melon farmers. They wanted to know the distinguishing advantage of milk over other leading and widely used chemical fungicides which are always available in commercial quantities; they finally found out that milk supersedes other chemicals. They were also amazed to know that milk can work as a foliar fertilizer which produces larger and tastier melons than any other in the group.

Recently, a vibrant Nebraska farmer named David Wetzel concluded a decade’s study on how to apply milk at different rates to his pastures. He was assisted by a local Agricultural Extension agent Terry Gompert -a weed specialist, an insect researcher and a university soil specialist to record the results.

Grasshoppers neglected the treated pastures; the sugars in the pastures are like poisons to soft bodied insects because they lack pancreas to digest them. This is another reason insects will steer clear of healthy, high sugar-concentrated plants. Milk Works as Fertilizer.

For those having portable gardens at home, you can change the ratio from 100% milk to a 20% mixture with water; yet you will still retain all the benefits. Use this to spray the compost and garden soil before planting, and as may be needed when insects will attempt to attack your garden. Spray this directly on the insects and around the areas they cluster. When you combine it with molasses, it becomes very advantageous to soil wetness. A trusted proven solution is 20% milk (1:4, that is, 1 cup of milk to 4 cups of water or 2:8, which is 2 cups milk to 8 cups water for wider gardens).

Molasses is Food for Micro-Organisms

Molasses is a viscous by-product gotten during the process of transforming sugar cane or beets into sugar. The Sulfur kind of molasses is produced from tender sugar cane. A preservative agent called Sulfur dioxide is added during the sugar extraction process. Molasses without sulfur is made from full-grown sugar cane, which doesn’t need such treatment. There exists three grades of molasses; the first molasses also called mild or Barbados, the second molasses also called dark and the third also called blackstrap. The third stage where boiling of the sugar syrup takes place is what forms the blackstrap molasses. A larger portion of sucrose from the original juice has been crystallized and extracted. The presence of calorie in blackstrap molasses is still mostly from the little remaining sugar content. However, unlike refined sugars, it has enough amounts of vitamins and right amounts of numerous minerals. Blackstrap molasses is believed to be a source of calcium, potassium, magnesium and iron. One tablespoon of blackstrap gives up to 20% of the USDA daily recommendation of each of those nutrients. 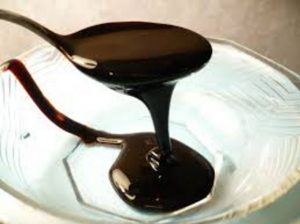 Molasses is a very valuable addition to the compost pile, as well as to the garden itself. Unsulfured blackstrap is the preferred variety, due to the mineral content, but any of the unsulfured ones will do fine. The benefits beyond the minerals are the natural sugar content that will feed the microorganisms in the compost or soil of the garden.

Use 1/4 to 1 cup to a gallon of water and spray onto the pile or garden, or add to the drip system for the garden. For soils that are poor, stressed or need help use 1 cup, while those that just need a little “snack” use 1/4 cup. The readily available sugar content will skyrocket the microbial activity.

Blackstrap molasses is also commonly used in horticulture as a flower blooming and fruiting enhancer, particularly in organic hydroponics. Use the before mentioned mixture in the drip system, or sprayed alongside the roots of fruiting vegetables as they start to flower to increase their flowering and fruiting. Add 3 Tablespoons of molasses to the milk spray solution mentioned above and use to feed plants during the height of growing season. Hungry, high production plants such as tomatoes, peppers, eggplant, melons, etc. will really benefit from the consistent feedings, giving you more production that is more flavorful.

A fringe benefit of spraying the milk and molasses mixture on the garden is a biologically friendly weed population control. Many broadleaf weeds thrive on diets high in available nitrates and potassium diets, common with commercial fertilizers. Phosphorus is “tied up” or bound with calcium in the soil and needs biological activity to release it. The calcium in milk helps to compensate for what is unavailable in the soil, while the increased biological activity from both the milk and molasses releases unavailable phosphorus and create soil conditions that are unfavorable to germination of weed seeds.

Who knew that something as simple as milk and molasses had such powerfully positive, far-reaching effects?

Posts from the same category: